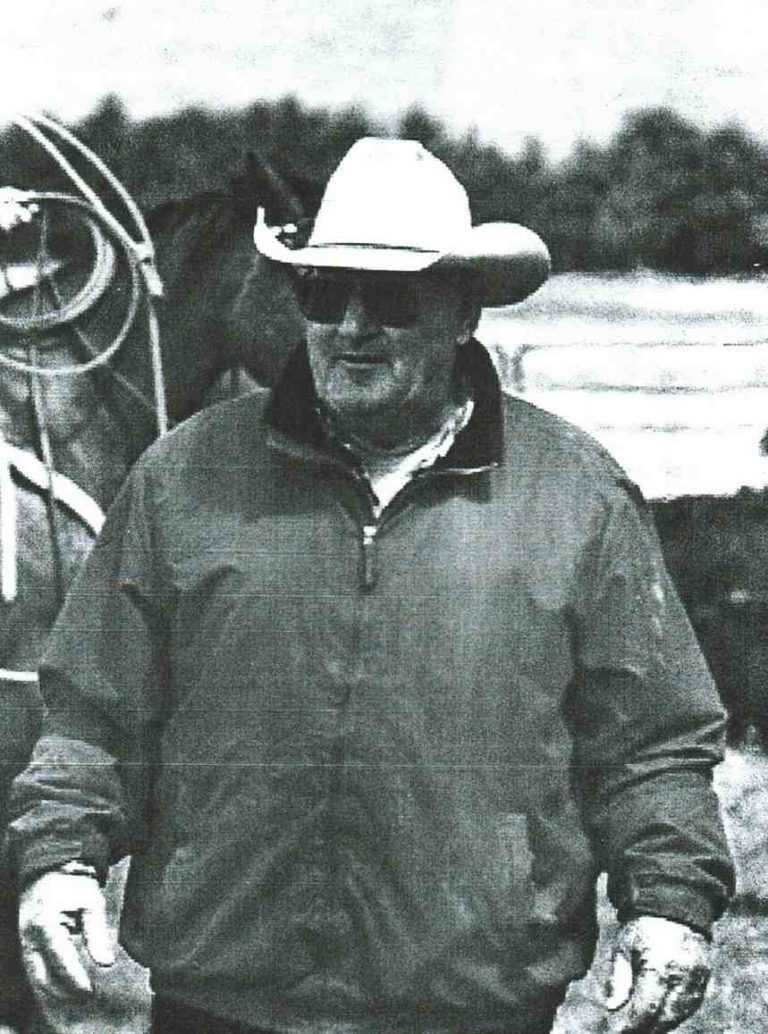 Richard Eugene Boots was born on October 4, 1943 to Gerald and Esther Boots of Ashby, Nebraska. He grew up living in or near Ashby until the age of 35, when he and his wife Lucie and family moved to Mullen in March of 1979. To this day, Rich and Lucie continue to reside in Mullen.
Rich was a cowboy from day one, living the everyday life of and in competition in the rodeo arena. His life is one of tremendous influences of those of the cowboy way of life, and many current members of the Nebraska Sandhills Cowboy Hall of Fame, including his father Gerald and his son Tom and his friends Harold Perrin, Howard Parker, Albert Hebbert and more.

There was something different about Rich very early on in his life. As his sister Ellen White revealed once, “when Rich was very young, he was very well respected by adults. They would listen to what he had to say.” It had a lot to do with his upbringing, where hard work was valued and appreciated, even from the young age of 4, when he began milking cows.

In high school in the late 50’s up to his graduation in 1961, he began working for Felix and Pete Becker north of Ashby, working weekends and whenever he could. He eventually rose to Ranch Foreman and would remain with them until 1979. He developed such a trust with the family that he was fully in charge of breaking the great Becker horse herd to ride and traveled with them around the nation and co-advising in the bull buying for the ranch. He lived in a magical time in the north Ashby area, when some of the greatest cattlemen of this state were operating their ranches. Rich was respected by every one of them, including Felix Becker, Pete Becker, Ed Becker, Sr., Ed Becker, Jr., Steve Stearns, Harry and Dick Minor, Rolf and Ed Brenneman. To this day, there is a photo in Rich’s house where of these great cattlemen gathered for a group photo, all horseback, with a teenage Rich, invited to participate, even though he was simply a hired hand with no relation to any of them.

Rich took his family to Mullen, Nebraska, to run the camp ranch of Farrar Cattle Company until 1991. In the end, he was the Manager of the day-to-day operations for both the Mullen and Hyannis ranches. Since 1991, Rich has been an independent cattleman.

The rodeo cowboy Rich Boots was short-lived, but a championship was reached and respect was gained forever. Rich will forever be known as the 1964 NSRA Bull Riding Champion, of which he earned at the age of 21. As great as the achievement was, he may very well be remembered for what he did that year in Bridgeport in the Nebraska/South Dakota Match, when he became the first man to ride the legendary Tar Baby of the Hollenbeck Rodeo Company with a score of 193. At that point, Rich was ready to go pro, but circumstances stopped him and he never went. Instead, he contributed by judging rodeos at the High School and NSRA levels for many years. One of his children’s fondest memories, of which he learned how great his father was, included a Sunday afternoon at the 1981 NSRA Finals in Mullen, when a bull rider had just bucked off and Howard Parker yelled out, “Hell, Rich Boots would have rode him for two days!”

In 2006, Rich was asked to join the Nebraska Sandhills Cowboy Hall of Fame Board of Directors. Ranchers and cowboys know him as a man of trust. And how fitting that he is inducted among his father and late son, commemorating his 49th anniversary of his NSRA Championship.