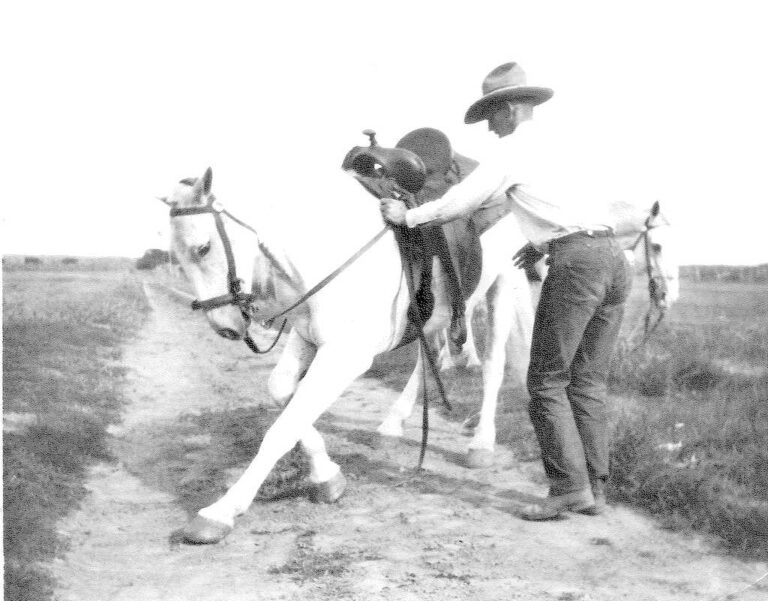 Walter E. Gibbons, Sr. was born March 21, 1898 in Comstock, NE to Edward Charles and Ida May (Wescott) Gibbons. Walter always said to expect a snow storm on his birthday, which was the first date of spring. He was usually correct. Walter passed away, February 28, 1975, at the age of 76. Walter spent his whole life in Comstock and Wescott, the latter a town named after his Grandfather, Walter S. Westcott.

Walter attended Comstock High School through the 11th grade. At the age of 16, Walter went to the University of Nebraska (Kappa Sigma), where he made the football team, playing center. During his two years at UNL, Walter took all the ROTC training he could, hoping to enlist for World War I, but he was too young. Walter was finally drafted, only one day before the War was over.

Walter had a lifelong passion for baseball. Walter was blessed with a wonderful arm and was a semi-pro catcher. On one occasion, Walter played on the same team as Tony Lazarri, a great New York Yankee shortstop. Walter also caught for local pitchers, left-handers, Roy Gibson and Elmer Duryea.

Walter and his wife, Sylvia Marie Havlik, were married in 1922 and were blessed with two children, Walter E. Jr. and John Bragg. Sadly, Sylvia passed away in 1944 when the boys were very young. Walter’s sister, Gladys Rockhold and Eva Brown were instrumental in helping Walter raise his two sons. Billy Smith, who lived with Gibbons’ from 1905 to 1951, also played a significant role for the family and ranch.

Wescott, Gibbons and Bragg, the General Store in Comstock, was also a part of Walter’s life. The general store and pharmacy was passed on to Walter from his Grandfather, Walter S. Wescott, his father, Edward Gibbons and his uncle, Charles Bragg. The store remained open until the mid 60’s and its fixtures are now a part of the Custer County Historical Society Museum.

Walter once described his ancestors as ‘more horsemen than cattlemen’. In his lifetime, Walter attained prominence in both. At his peak, Walter had amassed some 16,000 acres in Custer County and also leased 100,000 acres of the Cheyenne Indian Reservation in South Dakota. Herefords were Walter’s breed of choice and his cattle grazed far and wide. Walter was also prominent quarter horse breeder and was an organizer of the Quarter Horse Association of Nebraska, where he served two terms as President.

One of Walter’s more prominent stallions was Pat Murphy. Walter bought Pat Murphy in 1942 for $150. Pat Murphy became a great ranch horse and also in the rodeo arena. At one Burwell rodeo, Pat Murphy’s riders won the first seven places in the bulldogging. Once in Cleveland, Mike Fischer downed a steer in 3.2 seconds on Pat. Pat Murphy sired many performance horses which excelled from the rodeo arena to the show ring and race track. Pat Murphy died in 1959. He is buried on the ranch with a granite tombstone marking his resting place.

Walter’s mares and stallions won Grand Champions at Aksarben, The Nebraska State Fair and other honors at State shows. Not only did Walter’s horses perform well in the show ring, they also performed well on the race track. Some of his more notable race wins were Nebraska Bred Futurity, South Dakota Open Quarter horse Derby and the Nebraska Open Derby. Walter raced and showed Quarter horses across Nebraska, Colorado, South Dakota and New Mexico, winning many honors and several Register of Merits.

Walter helped organize and was President of the Middle Loup Public Power and Irrigation District. In 1960, Walter was recognized by the Nebraska Stock Growers with an ‘Award of Merit’ for his contributions to the Quarter horse breed.

In March 1973, writer Robert M. Howard interviewed Walter for an article in the Nebraska Cattleman. Robert’s closing paragraph captures Walter’s character…”To know of his association with long time enthusiasts and others, coupled with his major interest through the years in cattle and the community respect he has attained, makes this Custer County ranch an “all around.” Walter says his “life has just been cattle and horses” and he modestly refers to himself as “a pretty fair ranch hand.” One is convinced in his own mind that you can do no better than to ride the long trail with a man like Walter Gibbons.